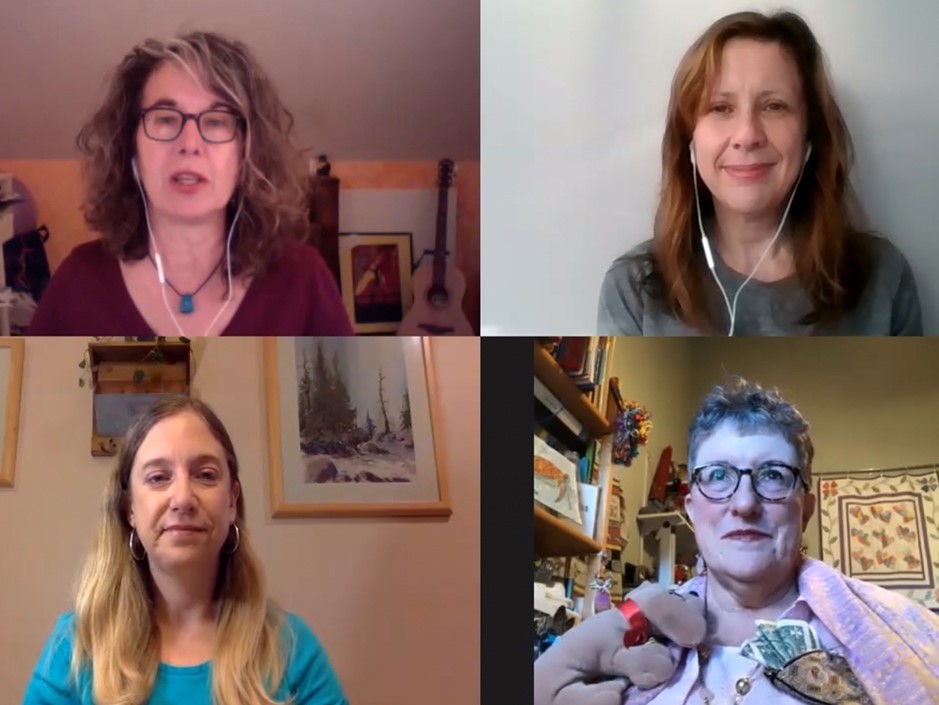 BY DEBORAH MOON
A humorous play on elder advocacy by Portland Jewish playwright Darlene Zimbardi comes to the virtual world in February as part of the Fertile Ground Festival of New Work 2021.
A program of the Portland Area Theatre Alliance, Fertile Ground will present 37 projects for the 12th annual festival, which is virtual and free for the first time (donations encouraged). This year’s festival productions will stream on Fertile Ground’s Facebook and YouTube channels from Jan. 28 through Feb. 7, 2021. Each show will premiere on a scheduled date during the 11-day festival, with most accessible for on-demand viewing until Feb. 15, 2021.
This is the third play in Darlene’s series “Reports from the Elder Front,” inspired by her own advocacy for her aging mother on the East Coast. The first play performed at Profile Theatre involves a four-day whirlwind to move Darlene’s mom and her dog into assisted living. Last year’s part 2 marked Darlene’s first appearance in the Fertile Ground Festival. This latest installment, “A Window into Elder World,” illuminates the perils of elder advocacy as a daughter advocates from afar for her mother, marooned in an assisted-living facility across the country during COVID.
“It is the sad joys of being an elder and the heartbreaking ups and downs,” says Darlene of the trilogy. “It’s a dark humor piece. … ‘A Window into Elder World’ shines a light in the labyrinth of elder advocacy while laughing at the absurdities along the way.”
“It’s a wake-up call,” she adds. “So many caregivers go into it blindly and don’t even know where to start.”
Darlene says writing the plays is her contribution to social justice, which she says drew her to Judaism.
Darlene grew up going to mass and attending Catholic school. In high school, she attended a public school where most of her classmates were Jewish. “As soon as I met my high school friends, the value of education and the arts came to the forefront,” she says.
Later as an adult, complications from lupus put her on life support. When she recovered, she went searching for a spiritual home and attended a class at the 92nd Street Y in New York. She converted to Judaism in 1997 and worked for Synagogue 2000 for a time. She and her husband, Allen Maertz, whom she met in New York City shortly after 9/11, moved to Portland in 2006. After attending Havurah Shalom High Holiday services and home-based gatherings at Gesher, she joined Congregation Shir Tikvah.
In addition to her social advocacy plays, she also volunteers for elderly and end-of-life organizations. She represents Shir Tikvah on the cemetery committee that oversees the Jewish Cemetery at River View. She volunteered for Signature Hospice for a number of years and now serves as a volunteer for Oregon’s Ombudsman program.
She also will be offering a free writing workshop for caregivers in conjunction with her staged reading at Fertile Ground (recorded on Zoom). The workshop and theatrical reading are supported by a Catalyst grant from the Regional Arts & Culture Council. The workshop will be 11 am, Feb. 6. For the Zoom link, email Darlene at
Darlene.zimbardi@gmail.com.