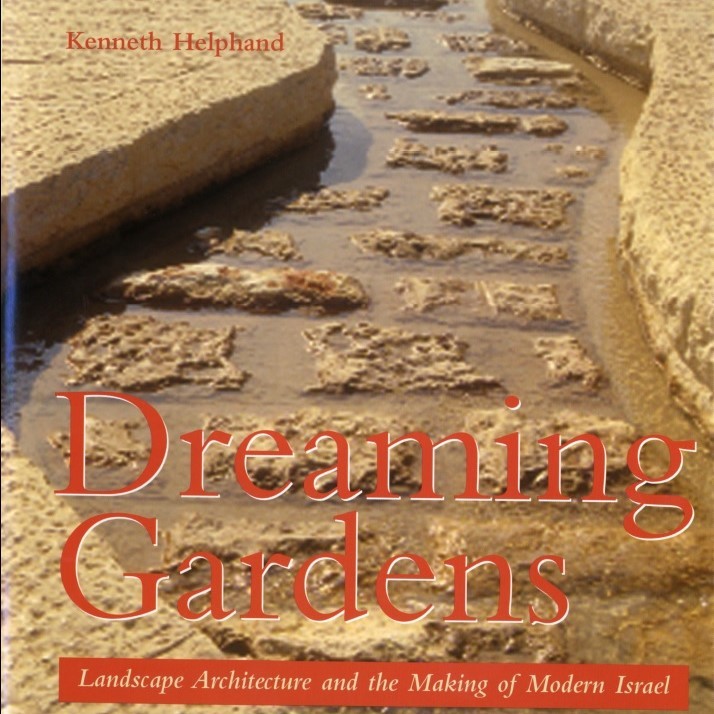 PHOTO: Kenneth Helphand's Dreaming Gardens features many projects in Israel by Landscape Architect Lawrence Halprin, z"l, whose work is featured in OJMCHE's exhibit of Portland Fountains. Kenneth is the guest curator of the Portland exhibit and a foremost authority on Halprin's work.

BY DEBORAH MOON
Landscape architect Lawrence Halprin (1916-2009) is renowned for his iconic projects in the United States: the Portland Fountains, Freeway Park, Ghirardelli Square, Sea Ranch and the Franklin Delano Roosevelt Memorial. Yet he also made crucial contributions to the landscape of Israel, which played a large role in forming Halprin’s values and vision.
Halprin lived in pre-state Israel as a teenager, helped found a kibbutz in the 1930s and maintained a relationship with the land and people throughout his life.
Kenneth Helphand, the guest curator of the current exhibit of Halprin’s Portland Fountains (see below), says that Halprin credits that formative experience, especially on the kibbutz, with creating his values of community working together and people’s knowledge and respect for the land.
“Halprin’s ties to Israel are especially notable,” says Judy Margles, director of Oregon Jewish Museum and Center for Holocaust Education. “When I look at photos of Ein Hashofet, the kibbutz that he helped found in the 1930s and one that I lived on for a summer when I was 14, I see the influence of its landscape on his projects, especially the Haas Promenade in Jerusalem and Sea Ranch in California. I’m grateful to curator Kenny Helphand for noting this important aspect of Halprin’s work and providing us with a deeper understanding of what inspired him.”
During his first sabbatical from the University of Oregon in 1980-81, Kenneth taught design studio and the history of landscape architecture at the Technion in Haifa, Israel. During that year and many subsequent visits, he visited many of Halprin’s designs in Israel. A dozen years later, the Israeli Association of Landscape Architects invited him to write what became Dreaming Gardens: Landscape Architecture and the Making of Modern Israel. He is also the author of Lawrence Halprin (part of the Masters of Modern Landscape Design Series).
But when the Landscape Journal asked him to write “Halprin in Israel” for the journal’s 2012 special issue devoted to Halprin, Kenneth took a deeper dive. He perused all of Halprin’s 167 notebooks in the Lawrence Halprin Collection, The Architectural Archives, University of Pennsylvania. 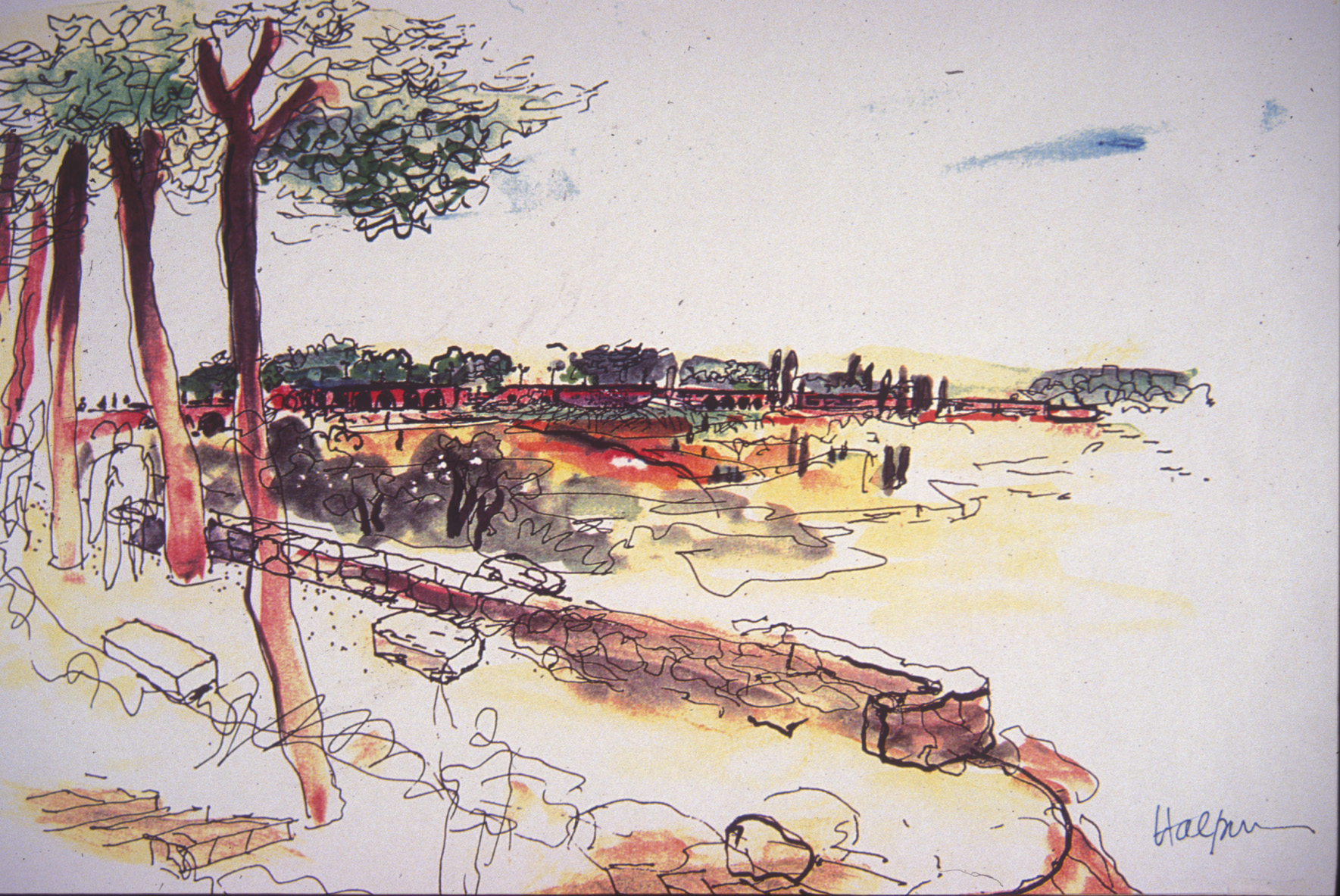 Kenneth searched the notebooks for sketches and notes about Israel before writing the in-depth, 20-page article. The article includes Kenneth’s photographs of Halprin’s projects and several sketches and notes from Halprin (including this sketch of a "View from Goldman Promenade looking toward the Haas Promenade").
“Israel and Jerusalem have affected my life ever since – my value systems and my attitudes have been deeply influenced. I have been deeply swayed by Israelis’ reverence for the land,” wrote Halprin in 1981 in notebook 122.
The article abstract notes: In Israel, Halprin advised on national landscape planning, national parks and was an influential member of Mayor Teddy Kollek’s Jerusalem Committee. His design projects, all in Jerusalem, include: the Hadassah Medical Center, the Israel Museum and the Ben Yehuda Mall. His most significant work is the Haas Promenade (with Shlomo Aronson) and the Rhoda Goldman Promenade (with Bruce Levin).
In a phone interview, Kenneth discussed Halprin’s work in Israel and Portland.
“The clear intention in virtually all his design work is how do you engage people in the landscape? A multi-sensory experience people see, feel, touch and hear,” says Kenneth. “The intention in Portland is to engage people in the fountains, in the water, in the sensory experience that kind of microclimate creates. … They are inspired by mountain landscapes – originally the Sierras and certainly the Cascades – (and) trying to get a sense of that into the city.”
While his design for Portland’s "Open Space Sequence" revolves around water, in Israel Halprin uses water sparingly.
“You shouldn’t have something like that in Israel, because water is so scarce,” says Kenneth. “If you are going to use water, you need to … use water in very prudent ways” – a single jet to create the sounds of water or a fountain modeled on the village fountains where villagers would get their water.
He notes in his article for the Landscape Journal, “Halprin designed the Ida Crown Plaza at the Israel Museum entrance and the entry promenade. His desire was ‘to establish the same quality of stepping up the hillside that the buildings of the museum accomplish so successfully … (T)he water in the plaza should have the quality of a source like a spring welling from a cave (Notebook 16, 1966).’ Within the plaza, water appears and disappears as it does in the mostly arid terrain of Israel.”
In honor of his mother who served two terms as president of Hadassah, Halprin also worked on the master plan, courtyards and a fountain for the Hadassah Medical Center. The fountain was an elegant square of pink limestone leading to broad steppingstones that flow into a large square pool with a single jet of water (Halprin 1963, 157). In the decades since, the institution has grown dramatically, and little remains of his original design.
Kenneth says the connection between Halprin’s designs in Portland and Israel is how you respond to being in a particular place.
“The centerpiece of the Haas promenade is (that) it is a response to being in this extraordinary location,” says Kenneth. It’s “one of the great views of the world” that people respond to irrespective if you have any religious connection but certainly “if you’re Jewish, Muslim or Christian, you’re looking at the most sacred landscape for all three faiths.” 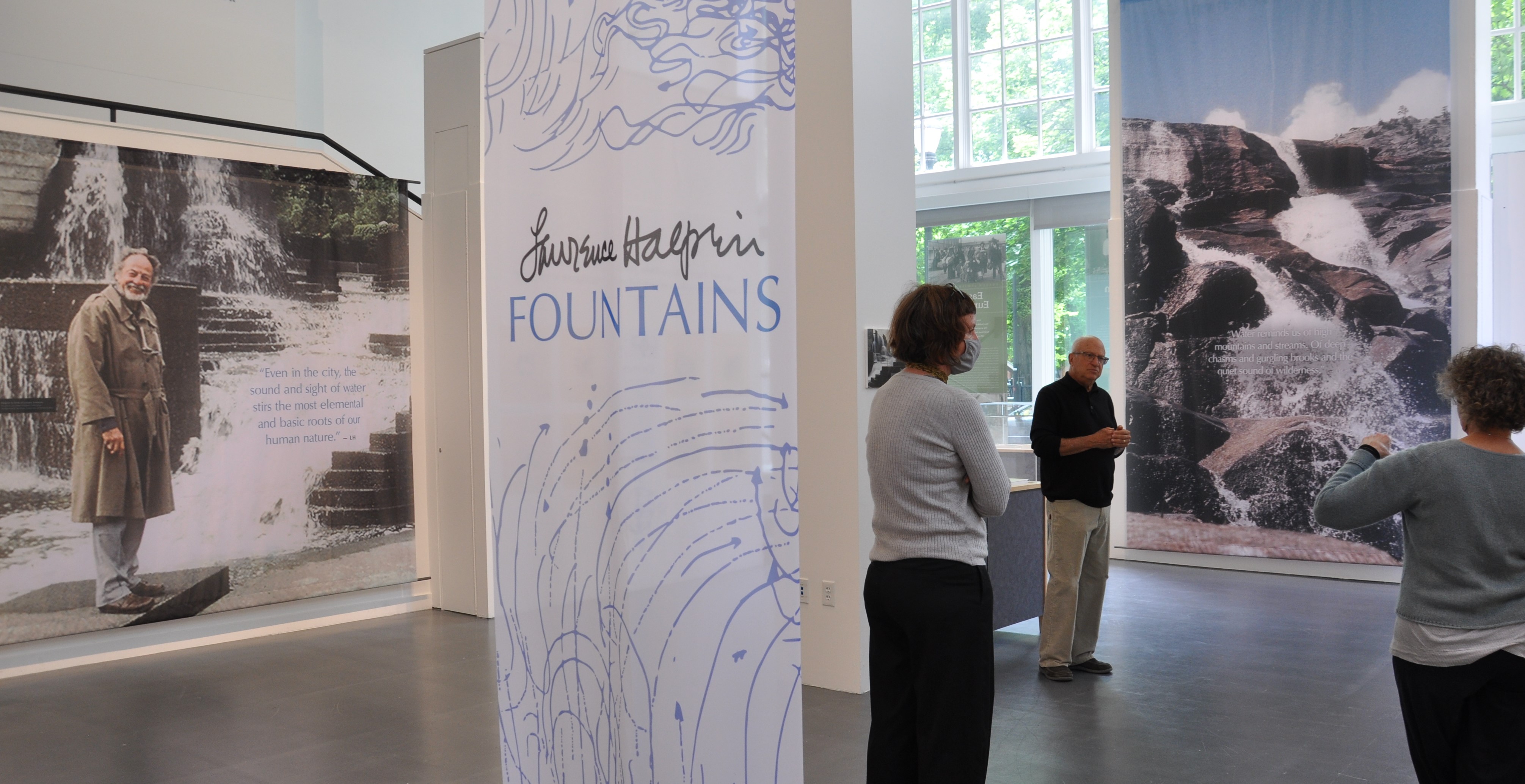 LAWRENCE HALPRIN, FOUNTAINS
“Lawrence Halprin, Fountains” celebrates Portland’s "Open Space Sequence," a reinvention of public space in the city’s first urban renewal district. Most of the exhibit focuses on Halprin’s relationship with water and his inspirations for creating the Portland fountains. Guest curator Kenneth Helphand is the Philip H. Knight Professor of Landscape Architecture Emeritus at the University of Oregon.
WHERE: Main Gallery of Oregon Jewish Museum and Center for Holocaust Education, 724 NW Davis St., Portland
WHEN: 11 am-4 pm, Wednesday-Saturday, through Sept. 26, 2021
ADMISSION: Adults: $8; students and seniors: $5; members and children under 12: free
INFORMATION: ojmche.org or info@ojmche.org