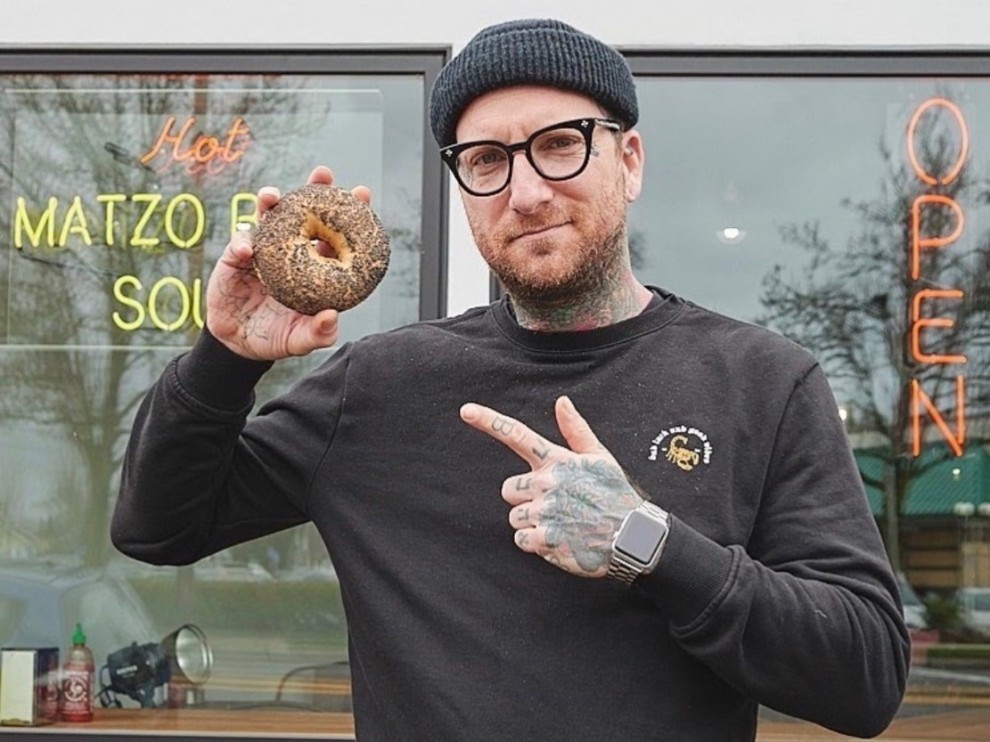 As many Portland restaurant owners can attest, the COVID-19 pandemic has been challenging on an epic scale. The Portland Food and Drink blog keeps a running tally of area restaurant closures, which recently reached 100. Surviving eateries are recasting themselves as groceries or “ghost kitchens,” building covered outdoor spaces or launching new concepts.
While it’s difficult to find a silver lining in this crisis, some of Portland’s most beloved restaurateurs continue to delight customers, who remain hungry for innovative, delicious offerings. And some have even found ways to honor their Jewish heritage in the process.
Bonnie Morales, chef/owner of the high-end Russian restaurant Kachka, had to think quickly when the pandemic reached Oregon. “We had to go down to a skeleton crew; it was heart-wrenching. And with a food business, you have perishable inventory, and it’s expensive. So, we had $15,000 worth of food sitting there rotting, and we had to make good use of it.”
Bonnie had to brainstorm how to communicate with her customers without having them enter the building. At first, she conducted all business through phone orders, trying to offer her entire fine-dining menu so that she could sell off her inventory. But she soon realized that this strategy wasn’t sustainable.
She soon found a niche in takeout dinner boxes. “One of the very first things that came up was Passover; this would have been our fifth year doing a seder. I was bummed to not have this holiday; it was this way I could express this other part of my culture that I don’t typically get to do (at the restaurant). So we did this dinner box for Passover, and it was this huge success. We sold out in two or three days!” Several generations of family members would pick up seder boxes and then celebrate Passover over Zoom. Ever since, Kachka has offered dinner boxes, with home delivery through Community Cycling Center.
Bonnie has also opened the Lavka Deli & Grocery, which offers a tantalizing variety of baked goods, caviar, meal kits and prepared foods. In addition, she started a line of frozen cheese and cherry dumplings that can be found at New Seasons, Green Zebra and other stores. And in December, the chef launched a special horseradish vodka, which had already sold through two entire pallets as of this writing.
In August, Allen Levin, who operated the currently closed Café at the J, opened the Garbonzos food cart in the Mittleman Jewish Community Center parking lot. The kosher, plant-based cart offers falafel, veggie kofta made from Beyond Burger, grilled vegetable plates, and a variety of salads and dips. View the menu or order online at garbonzos.square.site.
While Ben and Esther%u2019s owner Justin King offered deliveries at the start of the pandemic, when guidelines changed to allow takeout, he installed plexiglass guards around his counters and a sanitation station. In addition, he transitioned his deli to an all-vegetarian menu. “I figured now was as good a time as any to experiment and think outside the box, and our customers have been incredibly supportive of us,” he says. Especially popular dishes are Justin’s “Not-Lox,” which is made from thinly sliced, salt-roasted carrots, as well as vegan chicken salad, matzo ball soup and knishes. Justin also makes a “whitefish” salad with smoked, seasoned hearts of palm.
The chef’s efforts have been so successful that he is on the verge of opening a bakery and expanding the deli. We’ll be doing babkas, cheesecakes and pies, while on the deli side, we’ll be offering vegan Reubens on marble rye, vegan club sandwiches and more,” he says.
Located in the parking lot of the 76 gas station on Beaverton-Hillsdale Highway, the Holy Smokes Righteous Eats cart has been serving up kosher barbecue for more than three years. Owner and chef Steven Goldsmith hasn’t changed his menu since the start of the pandemic, but he’s seeing his clientele grow. “(People are) driving around, and they’re like, let’s just go walk over there – there’s no reason why we shouldn’t try it, it’s here!”
Steven is happy to report that his new customers are hooked on his cinnamon-spiked, boneless beef ribs and his Pacific Northwest take on brisket. About the latter, he says, “We use a coffee rub and onion wine reduction that goes on top. The idea was, Texas barbecue is salt, pepper, hot peppers and tomato vinegar. Ours has sage, coffee and sugar, and we balance it out with an orange chipotle barbecue sauce. It’s sort of a familiar flavoring, but with a Pacific Northwestern flair.”
When asked what has changed for him since the start of the pandemic, Steven says that customers no longer seem as interested in dessert, and that due to limitations on gathering, they take their orders to go instead of sitting down to eat. “People are getting used to not eating out.”